Discover the research behind the Low FODMAP Diet

Irritable bowel syndrome (IBS) affects approximately one in seven people worldwide. With this in mind, in 2005, Monash University’s Department of Gastroenterology research team launched a major study into the management of IBS through dietary treatment.

Through this exploration into the gut and the ways food can impact intestinal health, the team developed the Low FODMAP Diet – a plan to control the gastrointestinal symptoms associated with IBS.

During its study, the Monash research team discovered a group of short-chain carbohydrates that are either poorly absorbed in the small intestine or are completely indigestible.

Thanks to the Monash team, we now call these carbohydrates FODMAPs: fermentable oligosaccharides, disaccharides, monosaccharides, and polyols. Their poor absorption in some people triggers IBS symptoms.

How do FODMAPs cause IBS?

Because FODMAPs are relatively small in size, they attract water into the bowel. When they reach the large intestine, the resident gut bacteria ferments them, producing gas. This is what results in IBS symptoms – bloating, distension, pain, constipation and diarrhoea. 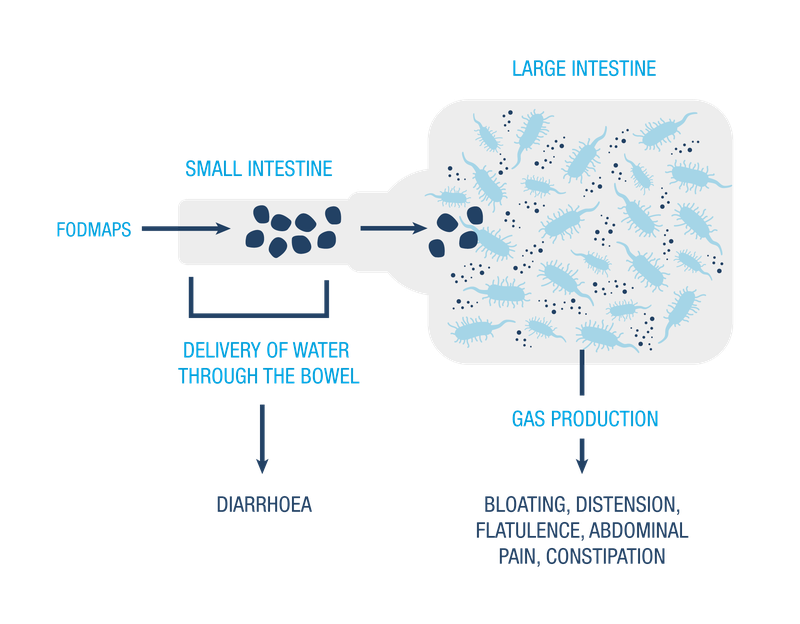 Fructose is absorbed efficiently when it’s in the presence of enough glucose. When you’re digesting more fructose than glucose, your gut absorbs it less efficiently. We call this ‘excess fructose’. In high doses, excess fructose may not be absorbed properly and can lead to IBS discomfort.

Fructose is a monosaccharide (one sugar unit). It is the smallest FODMAP which means that it attracts the most water into your bowel (known as an osmotic effect) and produces more gas (and potential IBS symptoms).

Lactose is a disaccharide sugar (two sugar units joined together). To absorb lactose, the lactase enzymes on the wall of your small intestines break it into two single sugar units. People who lack this enzyme are unable to absorb lactose well and experience gastrointestinal discomfort.

Polyols – found in some fruits and vegetables, sometimes added as artificial sweeteners

In most people, polyols aren’t absorbed completely in the small intestine, which can lead to gastrointestinal discomfort. Sorbitol and mannitol (often used as artificial sweeteners) are the most common polyols. So if you have IBS, it’s a wise choice to restrict your intake of artificial sweeteners in foods and drinks.

Oligosaccharides are made up of fructans (FOS) and galacto-oligosaccarides (GOS). These are longer chains of sugars that humans do not have the enzymes to digest. They are not well absorbed by anyone (we all know a joke about beans…), which leads to fermentation by bacteria in the large intestine and a higher production of gas. People with IBS have an extra sensitive gut – so this gas production can trigger uncomfortable symptoms of pain, bloating and wind (flatulence).

Why do people with IBS experience discomfort? 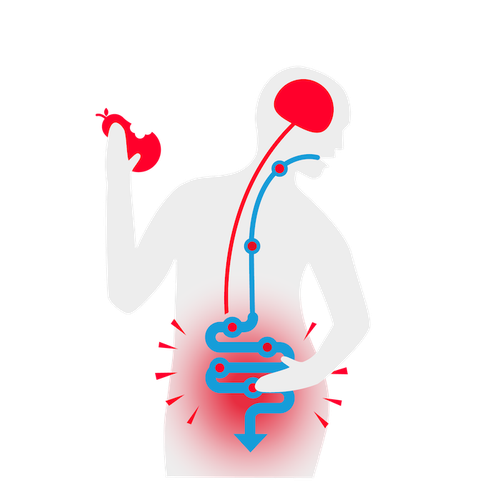 Malabsorption of FODMAPs is normal. What differs between people with and without IBS is the potential of these carbohydrates to cause discomfort. In healthy people, FODMAPs move through the bowel without much consequence. But, in people with IBS, the malabsorption of these carbohydrates causes severe reactions such as diarrhea, constipation, bloating, wind (flatulence) and abdominal pain and discomfort.

The symptoms that occur in people with IBS might be explained by a number of factors including:

In addition, in some people with IBS, bacteria that are normally located in the large intestine may move up into the small intestine. This relocation is called ‘small intestinal bacterial overgrowth’. When bacteria in the small intestine process and ferment FODMAPs, the resulting gas stretches this narrow section of bowel, causing abdominal discomfort, distension, bloating and abdominal pain.